Looking for an excellent alternative for Korean radish Kimchi (Ggakdugi)?

Then why not using Kohlrabi?

Ggakdugi is a type of Kimchi made from Korean radish. Koreans use this radish to make three different types of Kimchi. One is radish winter Kimchi in a broth called Dongchimi, the second is a mixed Kimchi called Seogbagji and the third is diced radish kimchi simply called Ggakdugi.

In times past, Korean radish was the vegetable that would be available all year-round, with the peak seasons being winter and spring. For this reason, Dongchimi was normally made in winter. 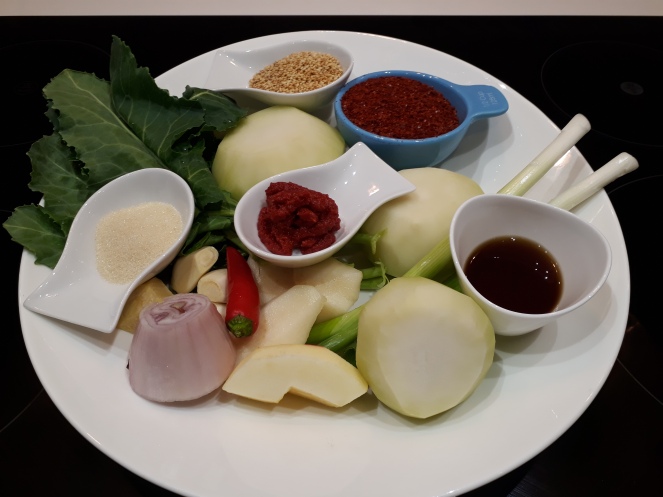 Korean radish is one of many Kimchi’s key ingredients but it is also used independently make its own specific Kimchi. This was the working-class side dish (Banchan) which was very affordable. The Korean radish stems and leaves are dried out during winter and then boiled when needed for use in the rest of seasons.

Ggakdugi wasn’t popular until 1850 which was the end of the Joseon Dynasty of period, but one of the princesses of the royal family introduced this dish in her cookery book. It was said that Ggakdugi helps our digestion and it is great for detoxing. This has actually been proved by modern science.

The Korean aristocracy didn’t eat this radish kimchi until around 1900 but the great flavour and its health benefits had been accepted. So, this dish became one of among the few dishes that were popular the dining tables of the lower classes as well as the upper classes.

There are a number of popular uses of Ggakdugi:

The Korean radish is large, very firm vegetable. The top stem, the greenish part is, crunchy and crisp with a sweet, nutty taste. The bottom stem, the whitish part, is peppery and dry, not juicy. Many Koreans only eat or use the top stem for cooking and white lower part for making stock.

Mooli can substitute for Korean radish, as can daikon or UK radish but these are all watery, more mild flavoured and less crunchy than the real thing.

I’ve found that the best replacement is Kohlrabi. It is crunchy, less watery and sweet it has exactly the best characteristic qualities of Korean radish (especially like the top stem, green part). I actually really love it. It is expensive but May is the Kohlrabi harvesting season and prices should be lower.

I often buy it from the online-supermarket (Ocado) at £ 2.99 for 350g but at the Cambridge market I actually bought Kohlrabi yesterday for only £1.50. At the Cambridge Sunday market (Simon’s local vegetable stall) I expect that the price will be even cheaper. They expect to have Kohlrabi from the end of May.

I believe using local produce is the best way of getting great nutrition and freshness. No matter how good your cooking skills, if you don’t have good quality ingredients then, it is more likely that your food will fail to be tasty. I’d advise that you use Kohlrabi, even when making Korean Ggakdugi for your first time.