Banchan (side dishes) are a big part of the Korean home kitchen. Kong-namul is one of the most popular side dishes and also one of the classic vegetable ingredients of Bibim-bab. It seems that Koreans started to eat this around 500 years ago.

Kong-namul muchim is an everyday banchan because it is inexpensive. The texture is crunchy and nutty and flavour of sesame oil. It is always served as one of the banchan in Korean BBQ restaurants. 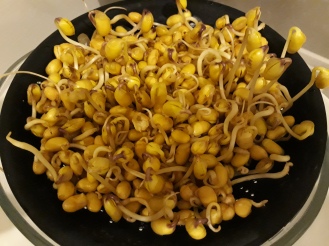 In Cambridge, we have only one Korean supermarket called Seoul Plaza. In the past they used to stock a lot of fresh Korean ingredients but now there are less Korean and more from other nations. Kong-namul is therefore harder to find, so I thought I would try to grow it myself. Unfortunately, after two attempts I have been unsuccessful but I am still trying because it is worth it.

There are two versions of this Banchan, one is seasoned with a soy sauce called Guk-ganjang the other is additionally seasoned with chilli.

Another use of Kong-namul is as soup with rice. We call this Kong-namul guk (soup) bab (rice) and it is famous as a hangover cure. There are many restaurants that specialise only in this “hangover stew”.

Another famous recipe is called Kong-namul-bab which is a kind of very delicious Bibim-bab but seasoned with only soy sauce.

Kong-namul is a very good combination with Kimchi either in a soup or stir fry. I love this and I can’t stop eating it. My sisters wonder how I eat these all the time for weeks on end!